In collaboration with Le Ciel Foundation Chris Roche is delighted to present an exhibition of works from his project Devotion that explores ancient and disappearing faith traditions around the world.

This online exhibition will run until Christmas with 20% of all sales being donated to Le Ciel Foundation.

The images from the gallery can be purchased  as archival Giclee prints.  They come in three limited edition sizes with a signed certificate of authentication.  For sizes and prices please view the online shop here

For enquiries regards our framing service, deliveries and discounts for multiple purchases please get it touch here

Over five years I photographed both the intimate and epic nature of several faith traditions: private moments of prayer and meditation alongside monumental scenes with thousands of pilgrims in dramatic landscapes. This journey took me to the Himalayas and the Andes; the republics of the North Caucasus, Chechnya, Ingushetia and Dagestan; to the remote and holy Mount Kailash on the Tibetan plateau; to a Kurdish village in the Zagros mountains of Iran; to Varanasi, one of the oldest cities in the world; and to the highlands of northern Ethiopia.  I saw commonalities that transcend faith and frontiers – the use of prayer beads, the practice of pilgrimage and the devotion to shrines to name a few, and of course just as many differences.

Across borders and amidst scenes of deep devotion I encountered poverty, superstition and repression. I saw, as is the case in most religions, women excluded from the privileged domains of men. However, I also experienced the beauty of the human spirit and a shared desire to connect to something greater than and beyond ourselves.

Many of these ancient traditions are now being lost to the forces of globalisation, mass tourism, political oppression, religious extremism and even global warming. I hope that this project is in some small way a testament to the importance of these traditions – traditions that reflect a shared and fundamental aspect of the human condition that dates back to the dawn of time.

Below I have introudced a brief narrative context to the images and the struggles these traditions now face to survive.

The Ethiopian Orthodox Church is one of the oldest forms of Christianity in the world and quite unlike any other. Its history is so imbued with myth and legend it is impossible to separate fact from fiction. One story has it that the Queen of Sheba travelled from Ethiopia to Jerusalem where she met King Solomon and begot a son, Menelik who later returned to Ethiopia with the Ark of Covenant which now resides in a small chapel in Axum. Furthermore, every Emperor since that day until the last in line, Emperor Haile Selassie, is believed to be a direct descendent of King Solomon.

Lalibela, conceived as a ‘new Jerusalem’ is home to a dozen medieval underground rock-hewn churches connected by a series of tunnels. Around 100,000 pilgrims descend on the site for Christmas where they keep an all night vigil before celebrating the birth of Jesus the following morning.

Tigray is perhaps best known for being on the front line during the war with Eritrea and for those scenes of famine during the 1980s. It’s less well known for the innumerable mountaintop monasteries and hidden cave churches.

However, with Chinese bulldozers carving highways across this remote land and the tour busses quickly following, many of these ancient traditions are already turning into spectacles for the tourists.

The practice of Sufism, a mystical interpretation of Islam in which Muslims seek to find the divine truth through personal experience of God, has existed throughout the Islamic world for well over a thousand years. However in recent times its existence has come under threat by the rise of Salafism and Wahhabism.

In the village of Uramantakht, historically and geographically isolated amidst the Zagros Mountains of Iranian Kurdistan, the villagers practice ancient traditions quite unlike the rest of the Islamic Republic. Ostensibly Sunni Muslims in a country that is predominantly Shia, the Kurds follow their own spiritual practices, most notably in the festival of Pir-e Shaliar that is said to date back to Zoroastrian times.

The North Caucasus, although geographically within Europe, feels quite different from the rest of the continent. The region is perhaps most famous for its wars with Russia, as a breeding ground for terrorism and its volatility. It is less well known for the practice of Sufism followed by the majority of the population in Chechnya and Ingushetia and a large minority of Dagestan.

Sufis have a strong adherence to the practice of Zikr. These zikrs generally take the form of a prayer circle of men who chant, sway and pray with all their body in the belief that this a path to achieve union with Allah. 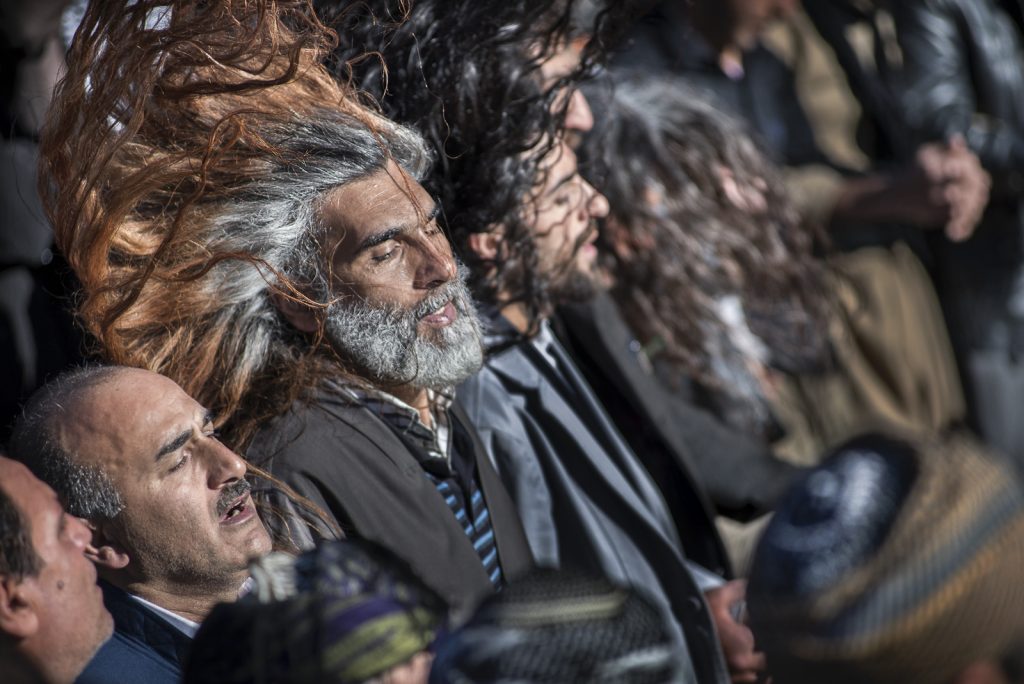 Both Spiti Valley and Ladakh are Buddhist enclaves in the far north of India along the border with Tibet. Spiti Valley is a high altitude desert, its name meaning ‘The Middle Land’. Having escaped the destruction of the Chinese Cultural Revolution and frequently cut off from the rest of India due to snowfall, it has managed to retain its unique identity and culture.

Ladakh translates as ‘The Land of High Passes’. Historically lying at the crossroads of important trading routes, many monasteries were built along the River Indus that flows across its plateau. However in 1949 the Chinese closed the border, a war broke out with India and the trading routes were closed down.

Both these regions suffer earthquakes, hostile climate, poor construction and flooding due to glacial melting – a result of global warming. A lack of conservation funds means that the survival of many of their ancient treasures is far from guaranteed. 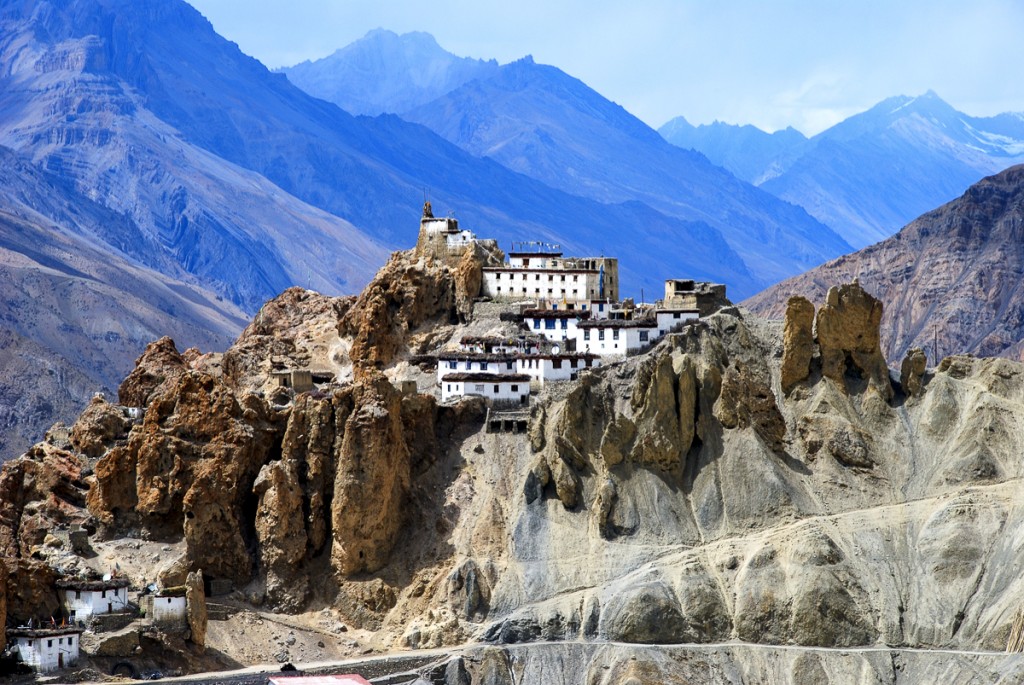 The Chinese invaded Tibet in 1950 and in 1959 led a brutal crackdown on an uprising in Lhasa. Fearing for his life, a disguised Dalai Lama fled by night, crossing hostile Tibetan terrain and the Himalaya before arriving in India. Tens of thousands of Tibetans have since followed the Dalai Lama to Dharmashala where he has set up the Tibetan government in exile. Over the years the Dalai Lama has sought a ‘middle way’ with the Chinese government in which Tibet is granted greater autonomy whilst remaining within China. His path has been one of peace and this was acknowledged in 1989 when he was awarded the Nobel Peace Prize.

Meanwhile the Chinese authorities have continued their path of destruction and persecution within Tibet. The environment has been exploited and perhaps irreversibly damaged, traditions banned, images of the Dalai Lama forbidden, ancient monuments and manuscripts destroyed, nomads corralled into specially built villages, protestors persecuted, monasteries closed down, monks arrested and so on. For the greater part Tibetans have followed their spiritual leader’s path of non-violence. Some have however been driven to desperation and chosen the most extreme form of protest: self-immolation.

In Amdo, one of the traditional regions of Tibet and birthplace of the current Dalai Lama, the great prayer festival of Monlam Chenmo is still celebrated during the heart of winter. During ‘The Sunning of the Buddha’ monks and pilgrims carry out a giant thangka from their monastery, across their town and up a mountain opposite. Here they unravel it, revealing a great image of a Buddha to the skies above and thousands of pilgrims below.

An ancient place of pilgrimage and holy to four religions (Buddhists, Bons, Hindus and Jains), Mount Kailash stands in the remote far west of the Tibetan Autonomous Region, a barren high altitude land, bordered by the Himalayas. The mountain is considered to be the center and birthplace of the universe, the mythical Mount Meru, the Axis Mundi, the abode of Shiva. Pilgrims come to complete the Kailash Kora– circumambulating the mountain at great altitude and in harsh conditions. Those that prostrate their way around the mountain usually take three to four weeks to complete the Kora. For Tibetans the pilgrimage is a journey from ignorance to enlightenment, transcending attachments to the material world and seeing reality as it truly is. 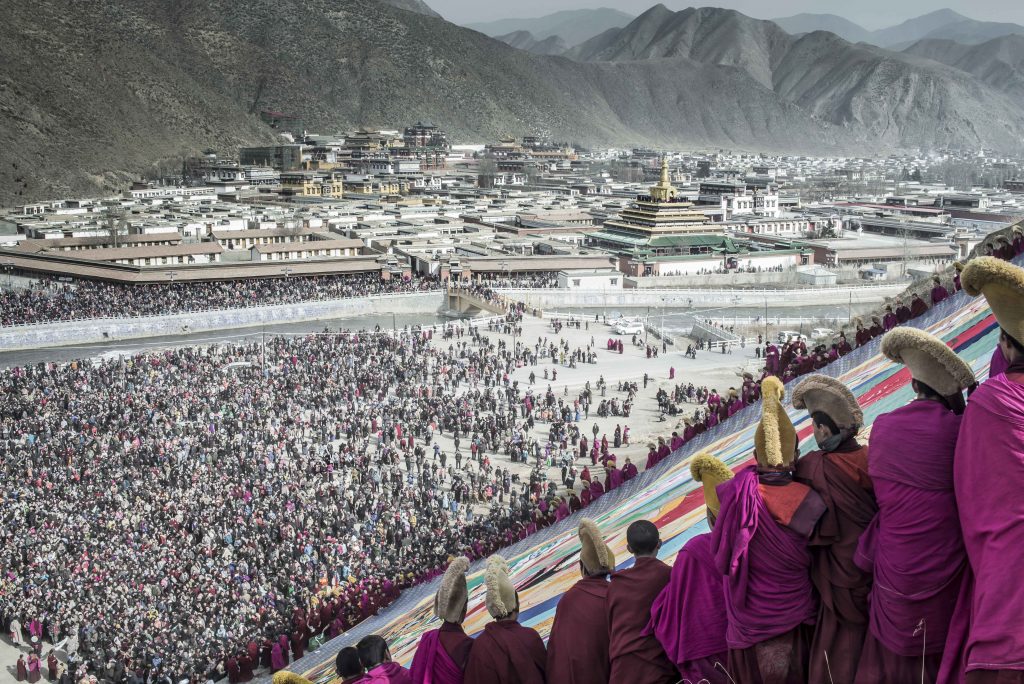 In the Peruvian Andes, several hours from Cusco, the Sinakara Valley lies below the great Apu of Qullquipunku at an altitude of 4600m. For most of the year it is empty but in midwinter around 80,000 pilgrims gather to celebrate the festival of Qoyllur Rit’I or Snow Star. The festival celebrates old Inca and animist traditions, particularly mountain worship, though many practices have been Catholicised. The story behind the festival is an interesting mix of these different faiths. Legend has it that a young mestizo boy befriended a local shepherd boy and helped looked after his animals. The herd prospered and the shepherd boy took a sample of his friend’s clothes down to his village in order to buy him new ones. However, no one had seen such material before and the Archbishop of Cusco led a team to investigate. They could not find the young mestizo and the shepherd boy died of sadness at losing his friend. At the place where this occurred an image appeared of the crucified Christ, reflected in a rock.

On the penultimate night men known as Ukukus begin their climb up to the glaciers of Qullquipunku to an altitude approaching 6000m where initiation ceremonies take place. Traditionally the Ukukus returned back to the valley with ice blocks that they used to purify humanity but the glaciers have been retreating due to global warming and this is now banned. So instead they return with the crosses, re-enacting battle scenes along the way. 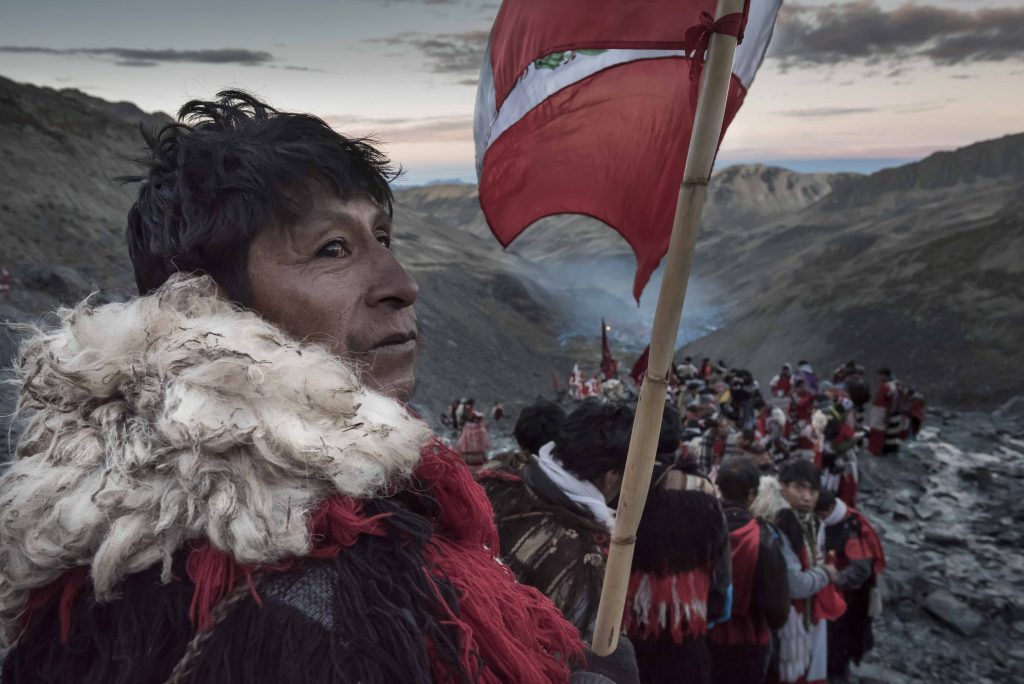 Varanasi, or Banaras, is one of the oldest cities in the world and the holiest city in India. It lies alongside the subcontinent’s holiest river, the Ganges. Devotional life infuses every aspect of daily life with the pilgrims following strict rituals and the Brahmins, boatmen and shopkeepers servicing their every need.

Every devout Hindu hopes to visit Varanasi at least once in their lifetime and almost a million do every year. To bathe in the Ganges, which is especially auspicious in the city, is to cleanse one’s sins. To die here automatically guarantees moksha, an escape from samsara, the greatest spiritual goal of any believer. For Varanasi is believed to be Hinduism’s greatest tirtha, crossing place from this world, with its endless cycle of rebirth, to one of liberation. So the devout, the sick and the elderly all make their way to this ancient place and for many this will be their final journey – the funeral pyres here burn all day and night, throughout the year. 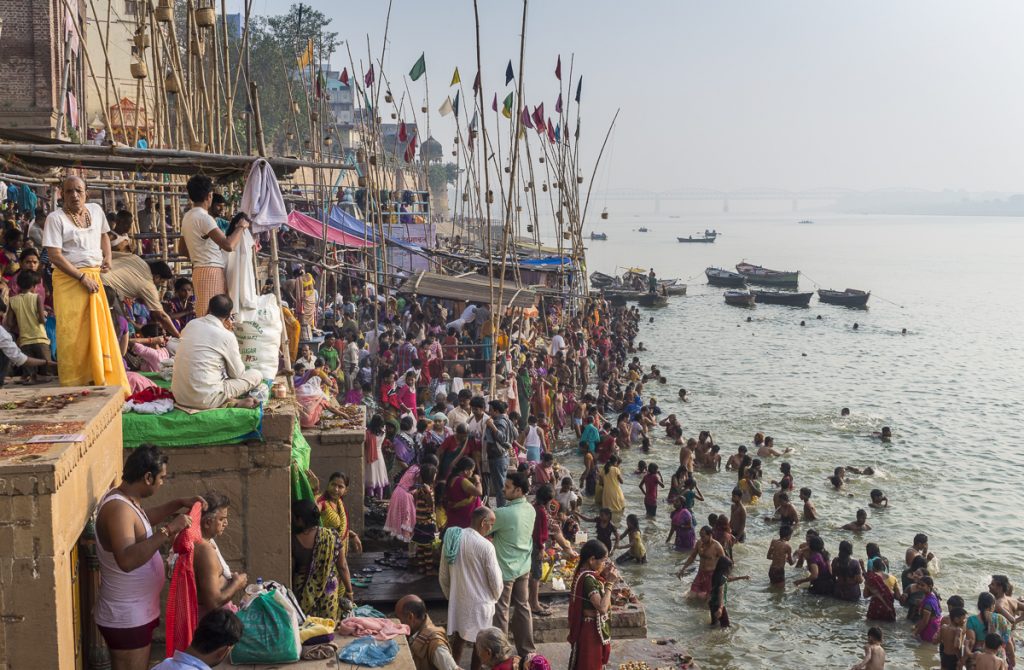