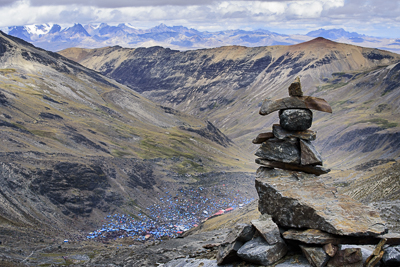 This May I traveled to Peru for the first time.  I was keen to photograph the festival of Qoyllur Rit’i which I had been researching for a couple of years.  Qoyllur Rit’i is a Quechua word that means Shining Snow and the festival attracts around 80,000 pilgrims to the Sinakara Valley a few hours outside Cusco at an altitude of 4600m alongside the great sacred mountain (or Apu) of Qullqipunku.

Old Inca and animist (particularly mountain worship) traditions have been Catholicised  and the story behind the festival is an interesting mix of these faiths. The story goes that a young mestizo boy with blond hair befriended a local shepherd boy and helped looked after his animals.  The herd prospered and the shepherd boy took a sample of his friend’s clothes down to his village in order to buy him new ones.  However, no one had seen such material before and the Archbishop of Cusco led a team to investigate.  They could not find the young mestizo and the shepherd boy died of sadness at losing his friend.  At the place where this occurred an image appeared of the crucified Christ, reflected in a rock. The Church of  Templo del Señor de Qoylloriti, has since been constructed over the rock and is a focal point of the festival.

We trekked up to the valley and set up camp, surrounded by ever growing numbers of pilgrims.  A combination of our tents pitched at a 30 degree angle down the slope, the effects of the altitude, -15 degrees temperature at night and the constant music meant that no sleep was going to be had for the next few days. 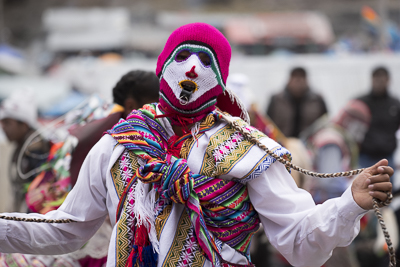 Alongside the pilgrims, ten Nations or naciones from various provinces make their way to the festival, wearing particular costumes and carrying banners that identify them.  There are pauluchas who are costumed dancers that carry alpacas foetuses on their backs and acts as intermediaries between the Lord Qoylloriti and his men, and ukukus who are the offspring of a woman and a bear.  They act as tricksters, speak in high pitched voices to disguise themselves, carry whips and police the events.

Long queues led to the devout masses that are held at the sanctuary whilst outside music and dancing take place day and night.

By the third day we had acclimatised to the altitude and we followed the bands of naciones as they headed up to the glaciers to plant crosses in the ice.

Having ventured up to the Sinakara glacier myself one day, I was corralled by a gang of Ukukus up to a ridge (at around 55500m) where a chief and his nacione awaited me. He gave a great speech as to how this was a holy mountain and I shouldn’t be there. 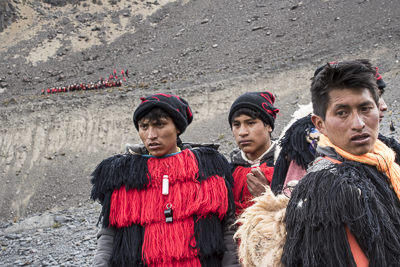 Feeling like I had just stepped out of Tintin and The Prisoners of The Sun, I gave my own speech back (that was translated into Quechua) how I came from a small island called Ireland to witness their great tradition and apologised for any disrespect. 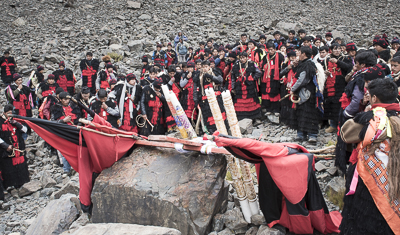 He nodded politely and then ordered that I was to be whipped.  It was a symbolic whipping – but stung enough to make sure I remember the event for many years to come.

On the final day the Ukukus begin their climb up to the glaciers of Qullquipunku at around 3am where an initiation ceremony takes place. Traditionally the Ukukus returned back to the Sinakara valley with an ice block which they used to purify humanity but the glaciers have been retreating due to global warming and this is now banned. So instead they return with the crosses, re-enacting battle scenes along the way.

The armies of naciones marching down from different mountain ridges in their various colours takes place on a breathtaking scale and is almost impossible to capture on camera.  It reminded me of scenes from movies set in medieval times or something by Kurosawa.

After a large mass at the Sanctuary the pilgrims then embark on a 24 hour trek under the view of the great Ausangate Mountain to a plain above the village and chapel of Tayancani.  Here the great Sun Greeting takes place.  Inca rather than Catholic, this ceremony once again sees the various groups line up across the slopes, accompanied by great bands of musicians whilst awaiting for the rays of the morning sun to reach them.

Finally the pilgrims make their way down to Tayancani and on to Cusco for the celebration of Corpus Christi.  I was to join them there with my camera but not before a very welcome hot shower. 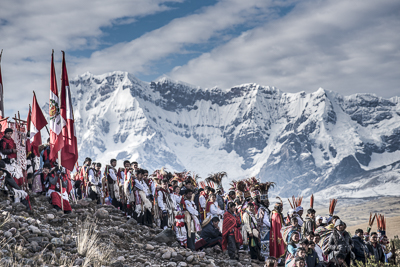