The North Caucasus, although geographically within Europe, feels quite different from the rest of the continent. Bordered by the Black Sea, the Caspian Sea and the Caucasian Mountains, it consists of several republics within the Russian Federation including Chechnya, Ingushetia and Dagestan. 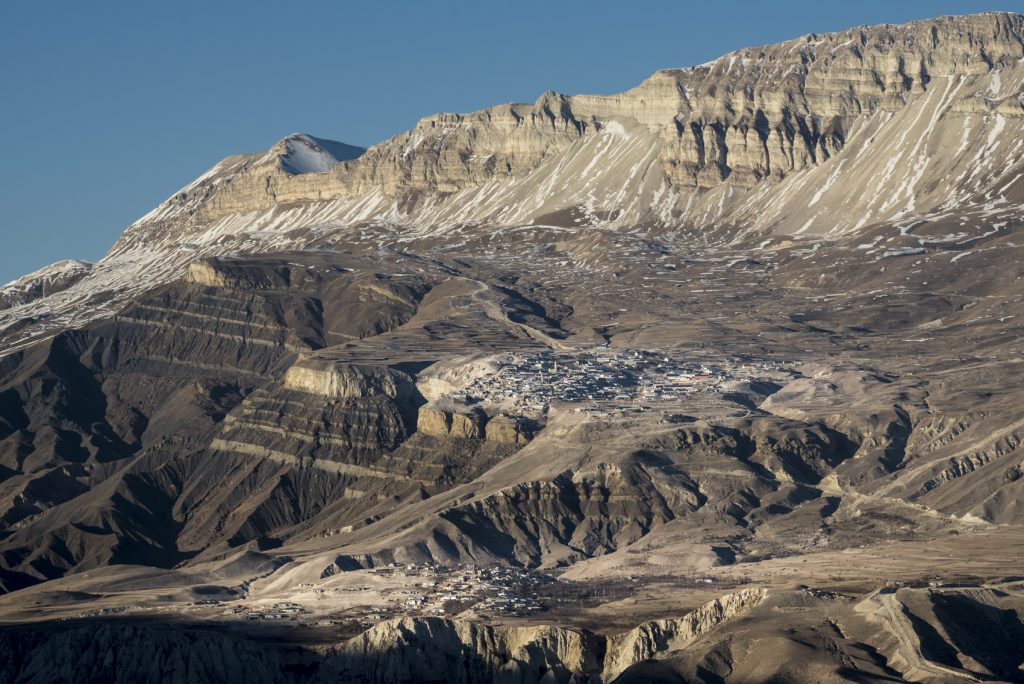 Possibly nearer the bottom of most people’s ‘to visit before I die’ lists than the top, I headed there this March in order to photograph the Sufis and their traditions.  The region is perhaps most famous for its wars with Russia, as a breeding ground for terrorism and its volatility. It is less well known for the practice of Sufism – an interpretation of Islam followed by the majority of the population in Chechnya and Ingushetia and a large minority of Dagestan. However, there does exist a tension between the more conservative Salafist branch of Islam (exported by Saudi Arabia) and the Sufis that sometimes results in insurgencies and fighting.

I was keen to photograph the Kunta-Haji Zikrs across the region. These zikrs generally take the form of a prayer circle of men who chant, sway, shuffle and dance. It could be considered a collective meditation. The men pray with all their body in the belief that this causes the demons inside to suffer and with nowhere to hide they leave.  It is usually done as an offering to Allah for the good of the community and often at funerals in honour of a dead man and to ease his way to better afterlife. 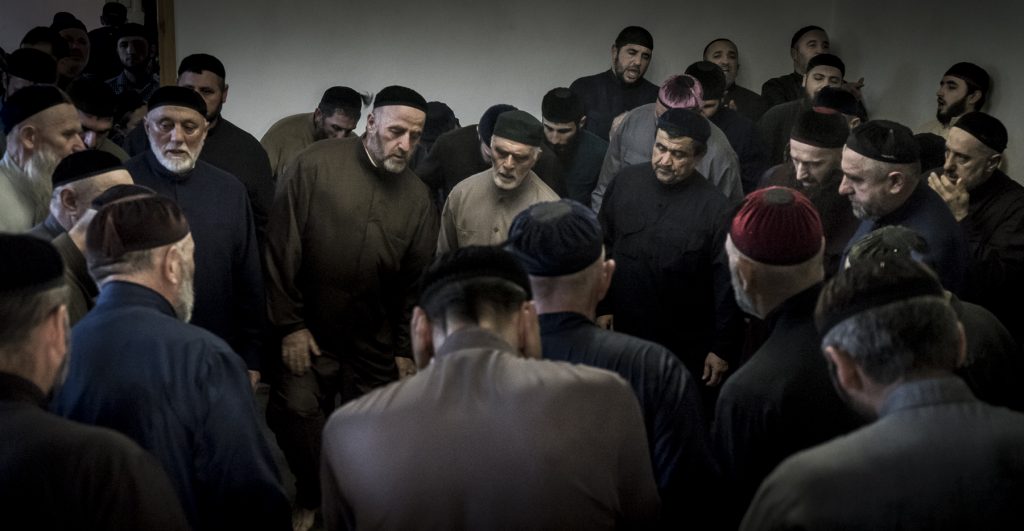 We started our journey in Andi and Gagatli, two villages in Dagestan. I googled them before starting on our journey and all I found were videos of the FSB with rocket launchers taking out insurgents hiding in the villagers. I was hoping that things had quietened down in the last year.

We were hosted by the mayor in his house and welcomed to the mosque where the men were going to perform a Friday evening zikr.

Moving on from Dagstan we crossed into Chechnya and travelled to Grozny, just in time for Friday evening prayer in the Akhmad Kadyrov Mosque, officially known as ‘The Heart of Chechnya’. One of the largest in Europe its design was based on the Blue Mosque, Istanbul.

I also had a chance to photograph the futuristic looking Aimani Kadyrova Mosque in Argun, not far out of the capital. 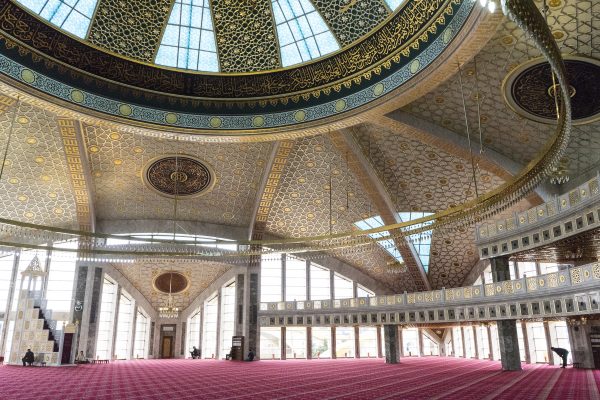 We spent the next couple of days hunting Zikrs and thanks to a contact I had we were introduced to an Imam called Nokhcho. Nokhcho is the actual name of the nation in the Chechen language – ‘Chechens’ being an exonym introduced by the Russians. 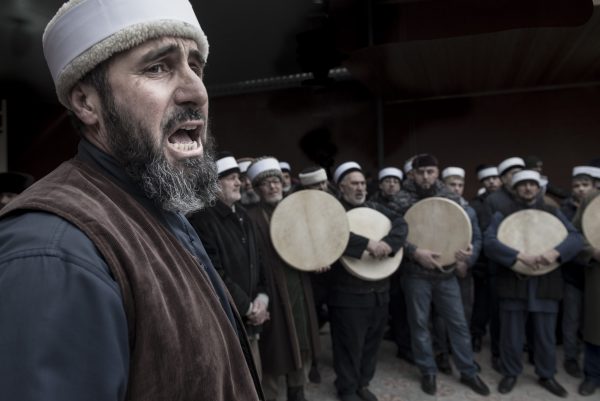 Nokhcho in turn put us in touch to a leader of a Zikr – Ismail. Ismail used to be a policeman, but now living off his pension and what his garden provides, he has dedicated himself to a spiritual life and his voluntary work as zikr organiser and leader. 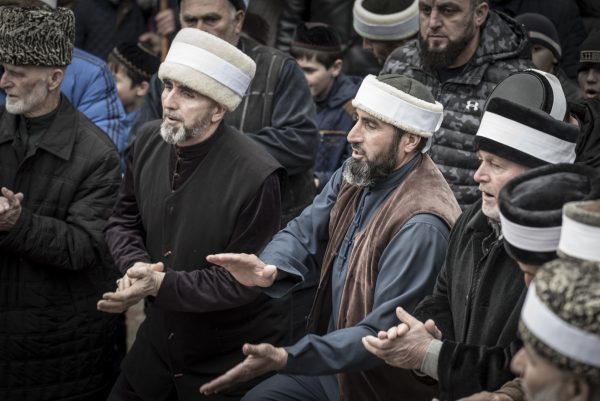 We joined him and members of the Qadiriyya Tariqa order of Sufis in the village of Kurchaloy. They say they are followers of Kunta-hajji vird But actually are a branch known as white hats who usually sit with women and play instruments. 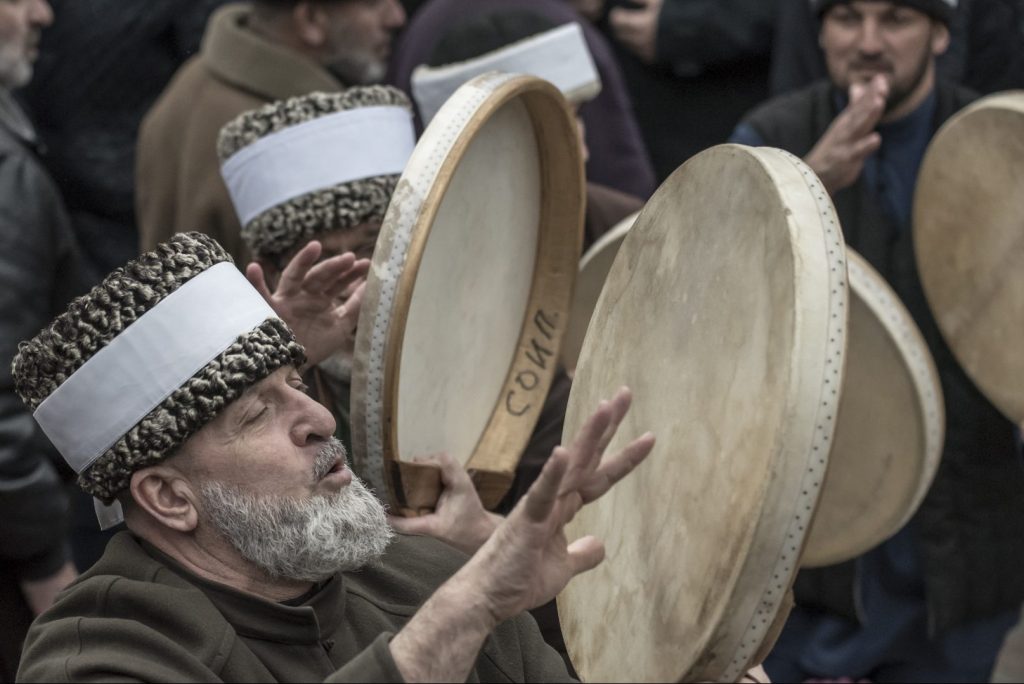 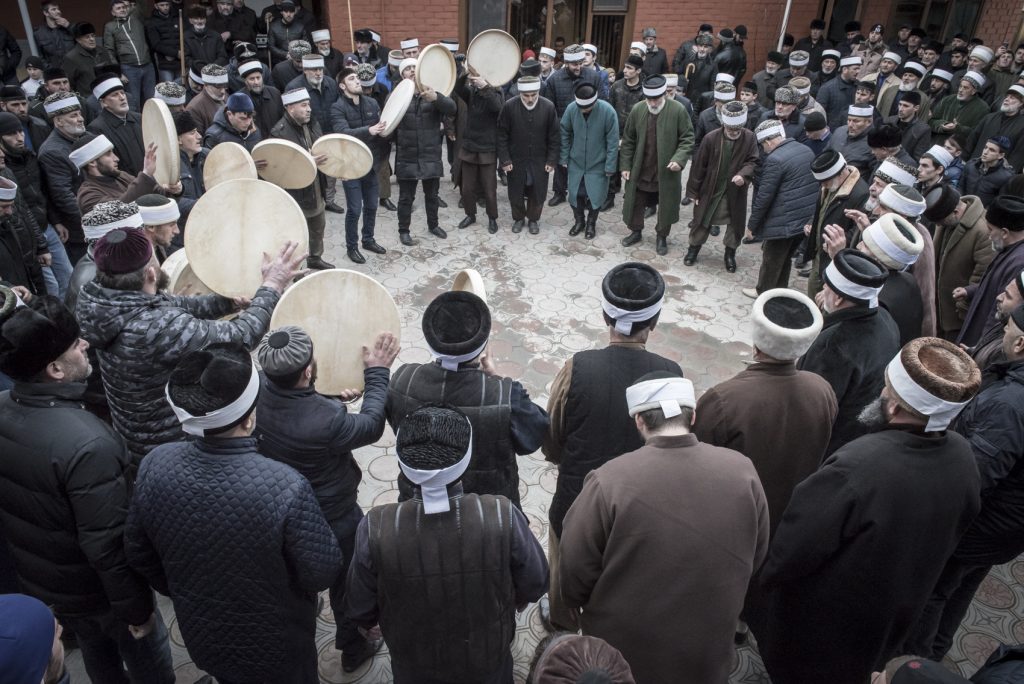 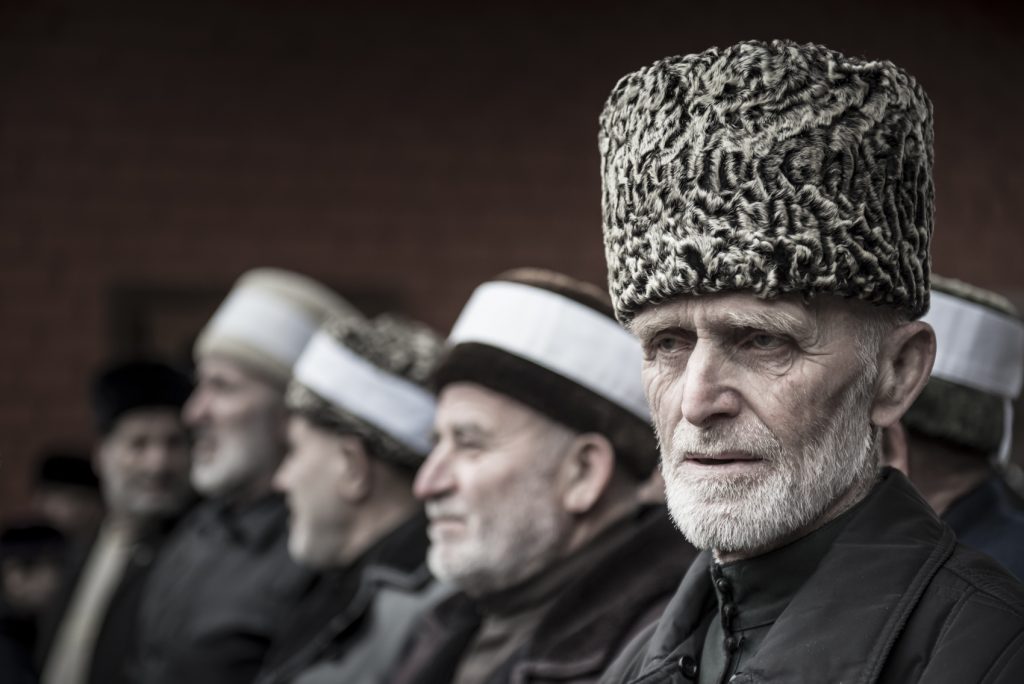 Back in Grozny we visited the Hafiz School where young boys aged 9-13 have three years to learn the Koran by heart. To get a place at the school they have to learn the last chapter. 50% fail to complete the school and many of those that do pass go on to lead a secular life, though with a great accreditation, whilst others make a career within Islam. The government is currently encouraging the schools and more are growing. 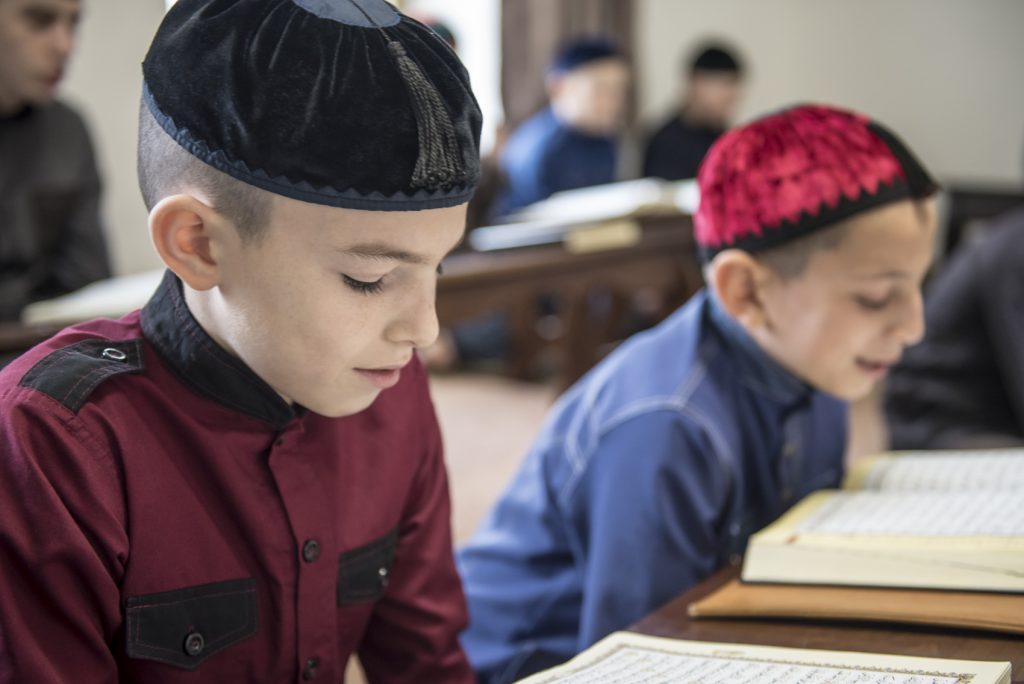 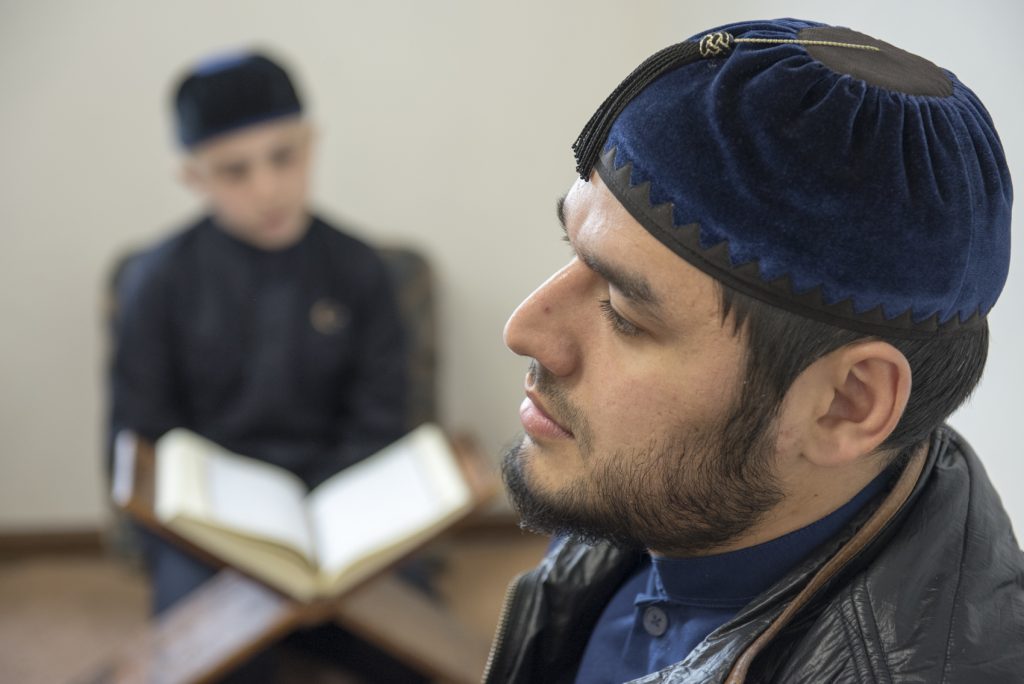 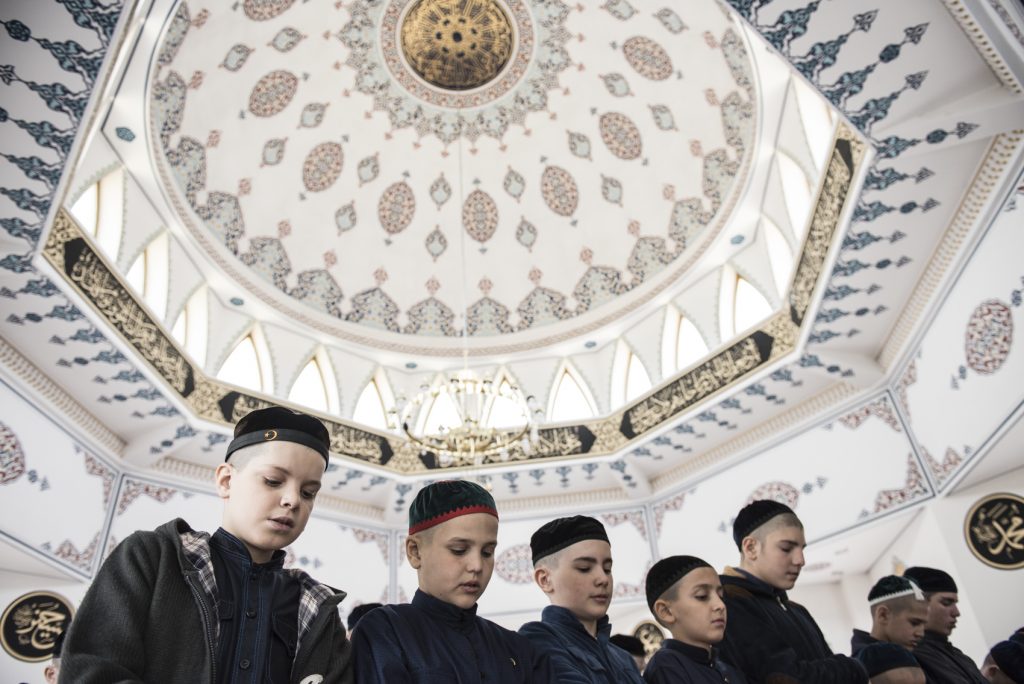 We then headed into Ingushetia where we were guest of Akhmed who lived with his extended family in a large house.   Ingushetia is the smallest of Russia’s republics and one of the poorest due to corruption, kidnappings, murder (often carried out by government security forces) and regular insurgencies.  Not long after our arrival we had a visit from the FSB – not many tourists visit Ingushetia.

Akhmed was evidently an important man within the world of Zikrs and had endless energy. When he wasn’t insisting on us being fed or leading us to Zikrs he was constantly disappearing on ‘business’. 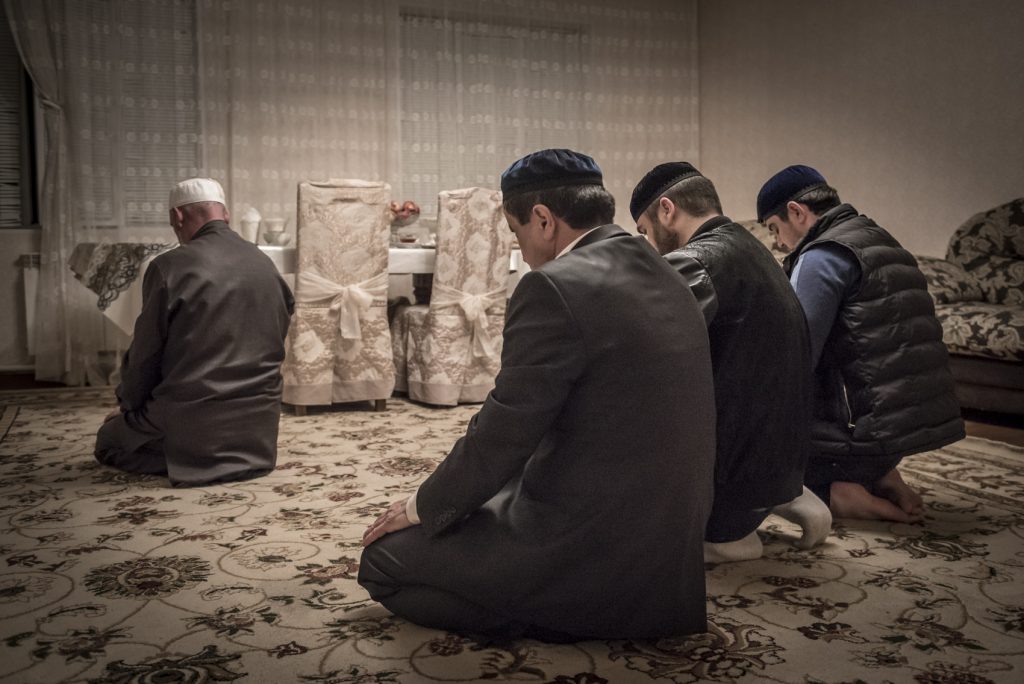 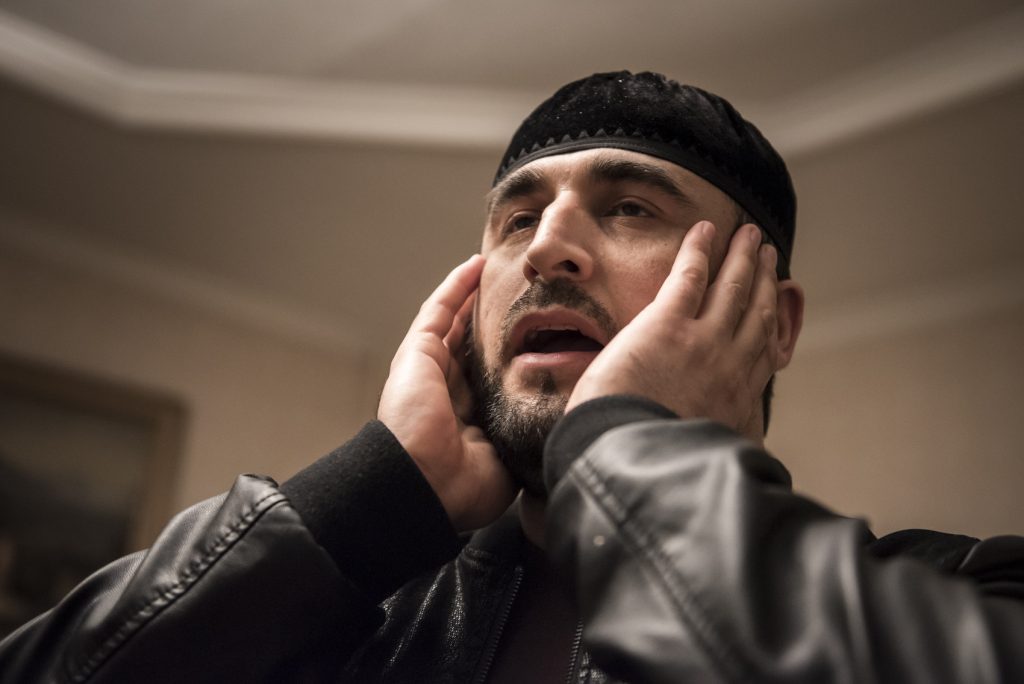 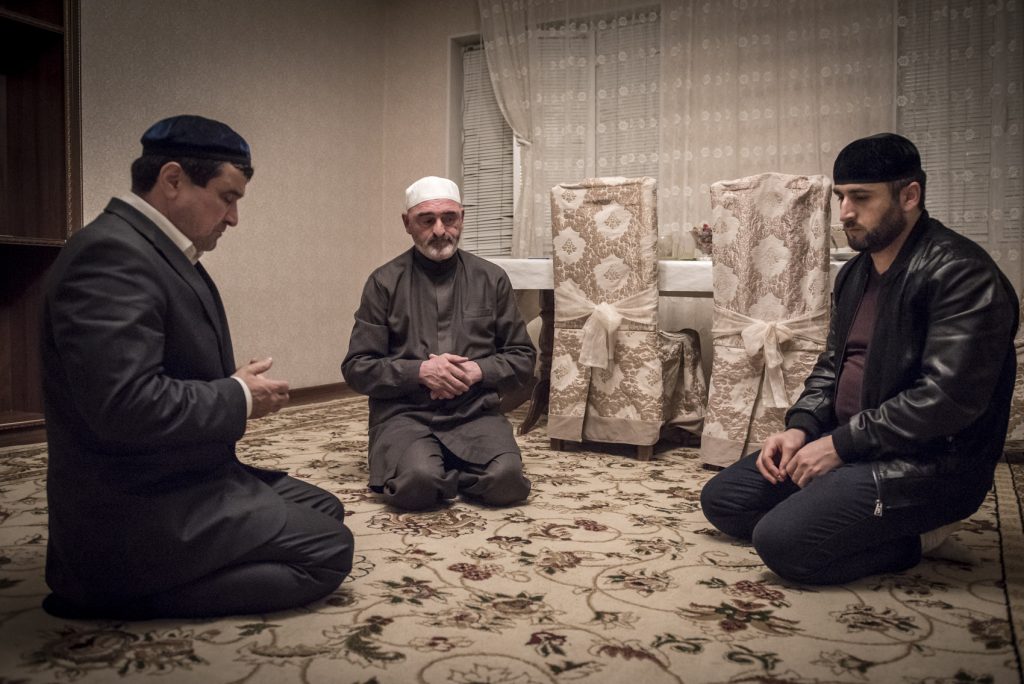 That evening we were taken to a Kunta-Haji Zikr in the backroom of a house that was hosting a funeral.  Kunta-Haji Kishiev was a mystic who lived from 1830-67 who latterly became known as the Chechen Mahatma Gandhi. Considered by his followers to be one of the 360 saints that keep the world alive, they believe he will return to Earth at a future time.  A follower of the Qadiriyya Sufi Tariqa (Order) he founded the vird (school) known as Zikrism and preached non-violence and passive resistance. Despite his followers being exiled to Siberia his branch of Sufism became the most popular in Chechnya. 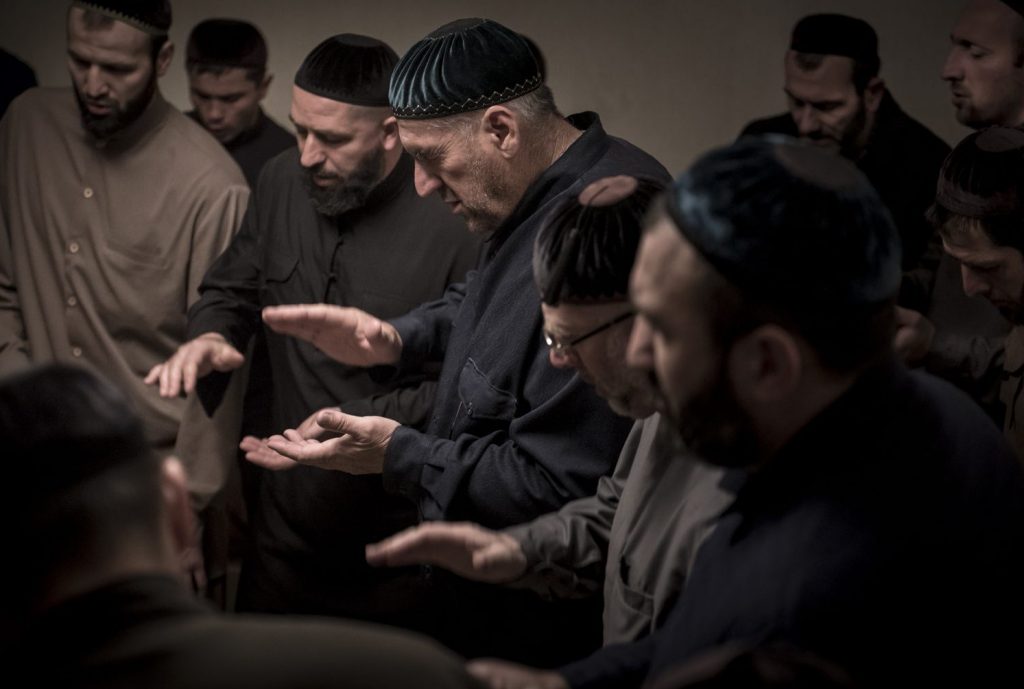 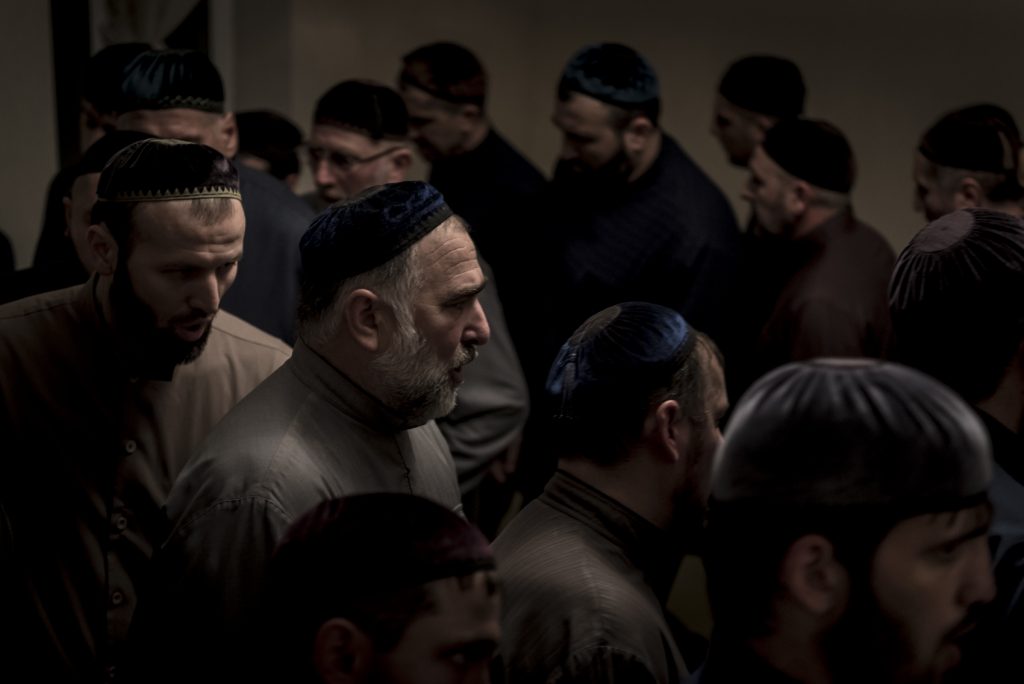 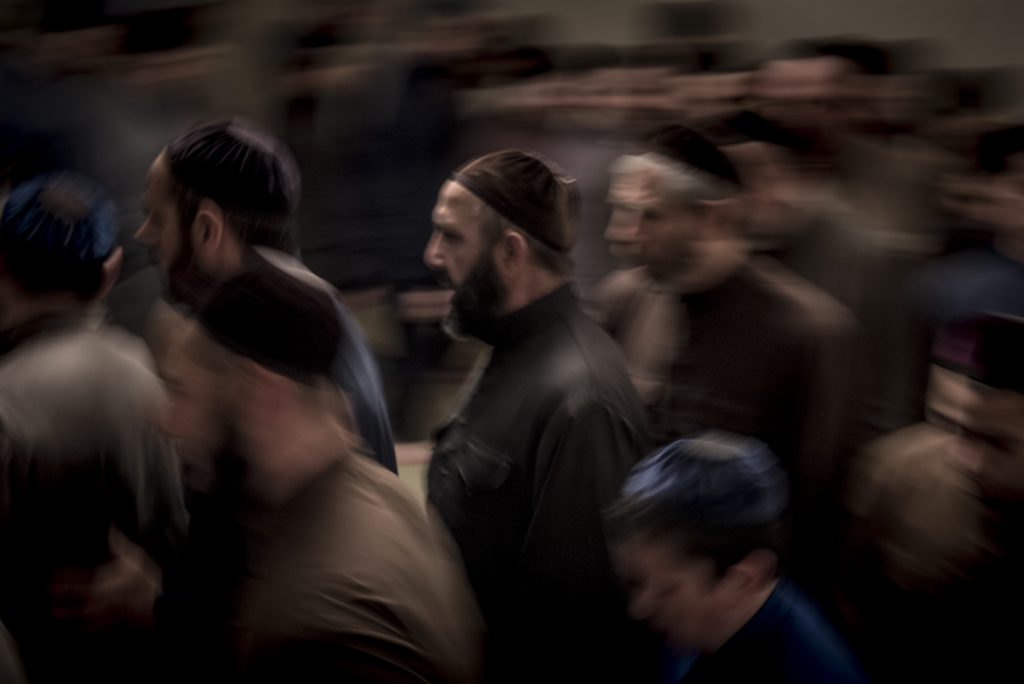 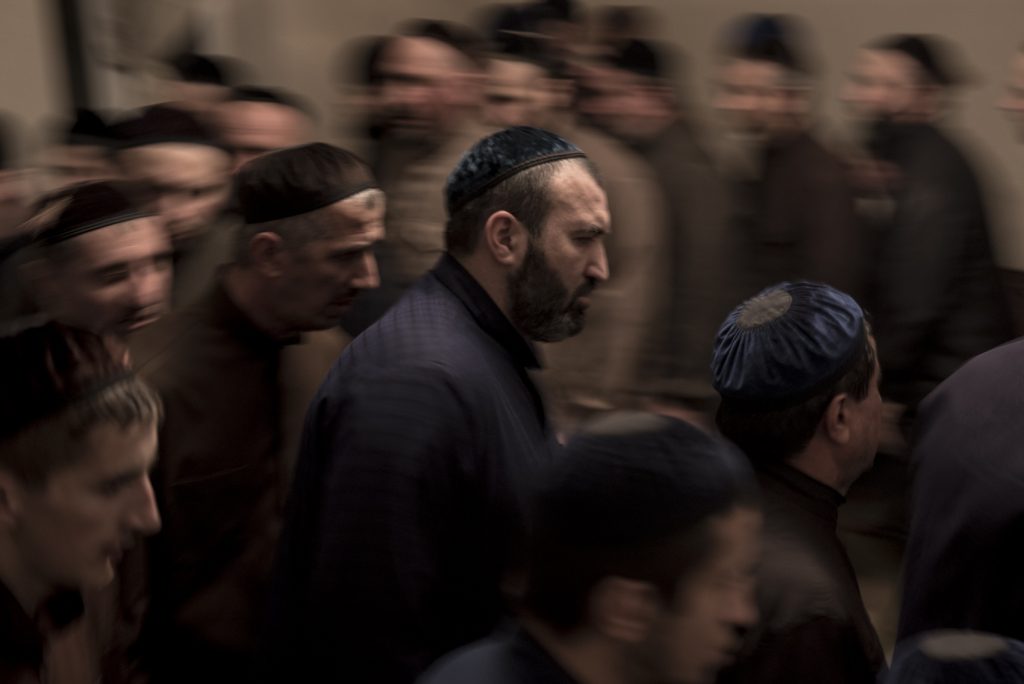 “War—it is savagery. Remove yourself from anything that hints of war if the enemy hasn’t come to take away your faith and honor. Your strength is wisdom, patience, fairness. The enemy will not withstand this strength and sooner or later will admit his defeat. No one will have the strength to defeat you and your truth if you don’t turn away from the path of your faith” – Kunta Haji.

The following day we joined a funeral and its accompanying Zikr of the Vis-Haji Vird (White Hats) in Noyber Village.   Whilst the men prayed and danced the women watched from the edge of the compound where they were busy cooking the traditional funeral feast.

Our final night in the republic we witnessed the funeral of an important man. The Zikr attracted more than 100 followers of the Kunta Haji Vird including the bodyguards and brothers of Yunusbek Evkurov, the Head of Ingushetia.

We then crossed into Vladikavkaz, the capital from North Ossetia.  North Ossetia, originally on the Silk Road and fought over by differing empires is now for the most part Orthodox Christian but has a complex demographic and has suffered much turbulence.  During the collapse of the Soviet Union many people were displaced between North and South Ossetia (which was claimed by Georgia) and ethnic conflicts ensued with the neighbouring Ingush. North Ossetia made international news in 2004 when Islamic Militants seeking Chechen independence took over the school in Beslan and held over 1000 hostages siege for three days.  When security forces stormed the building more than 300 of the hostages (including children) were killed in the following maelstrom.  From Vladikavkaz we set out to explore the stone towers around the Darghav region.  Many of these form a necropolis known as ‘The City of Dead’ with some of the oldest crypts dating back to the 12thC.  At the highest point there is a tower to look over the tombs and the dead.  It is said that during times of plague when there was no one to bury the dead, the dying would enter their family crypt to await their death. 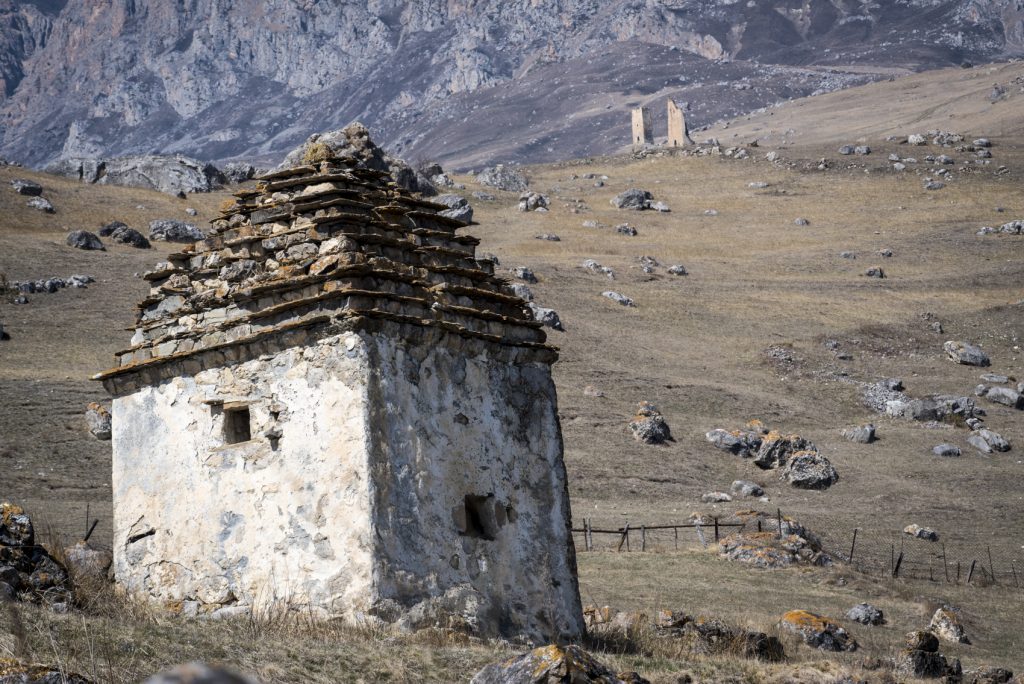 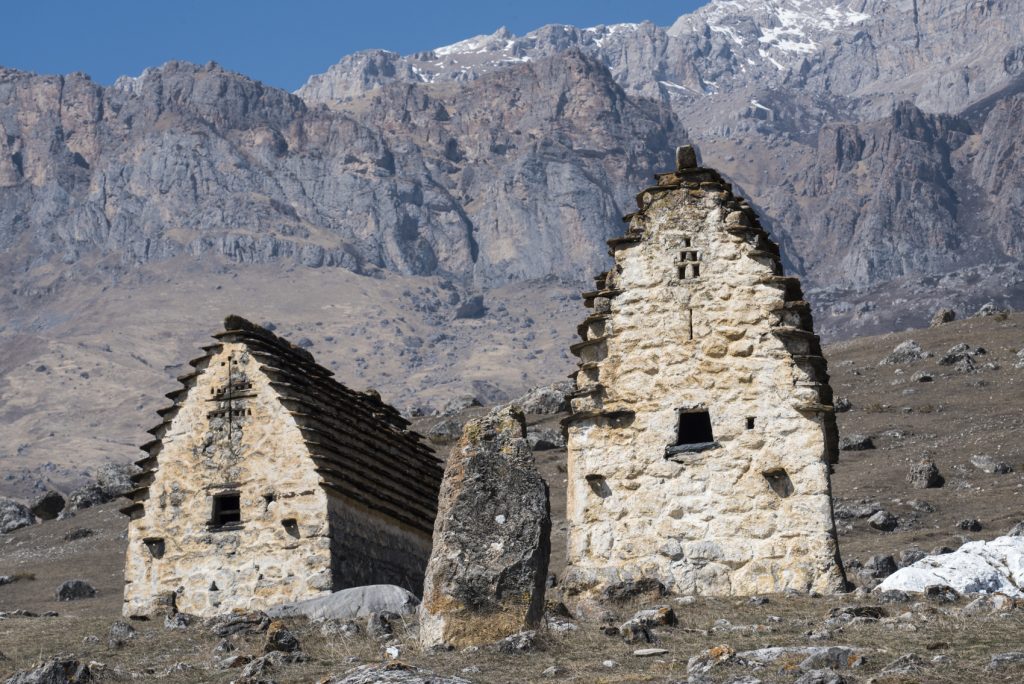 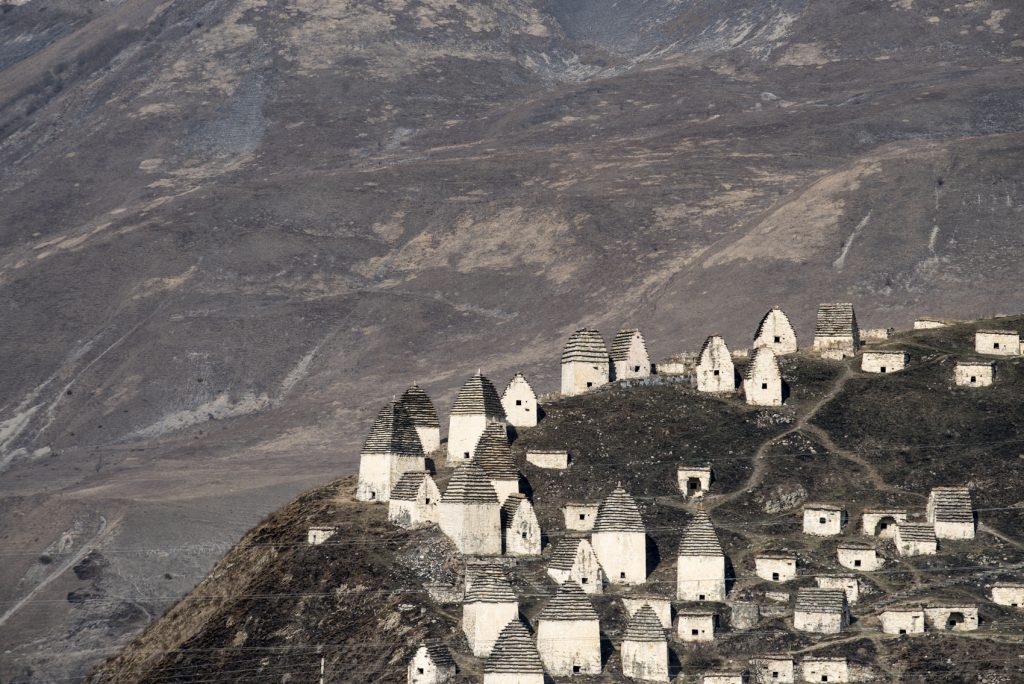 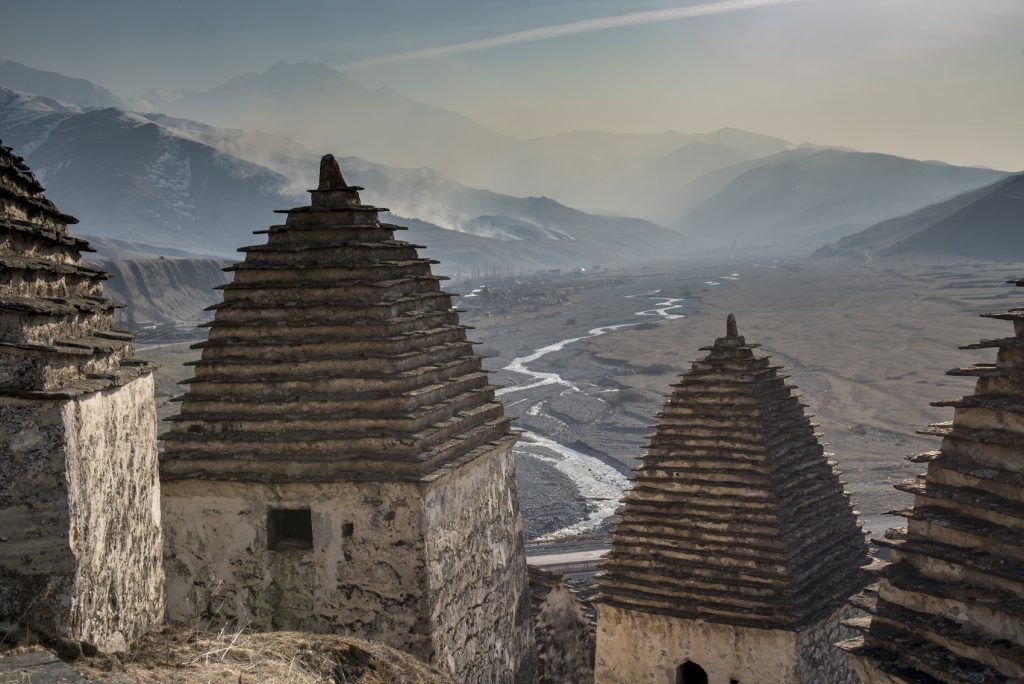 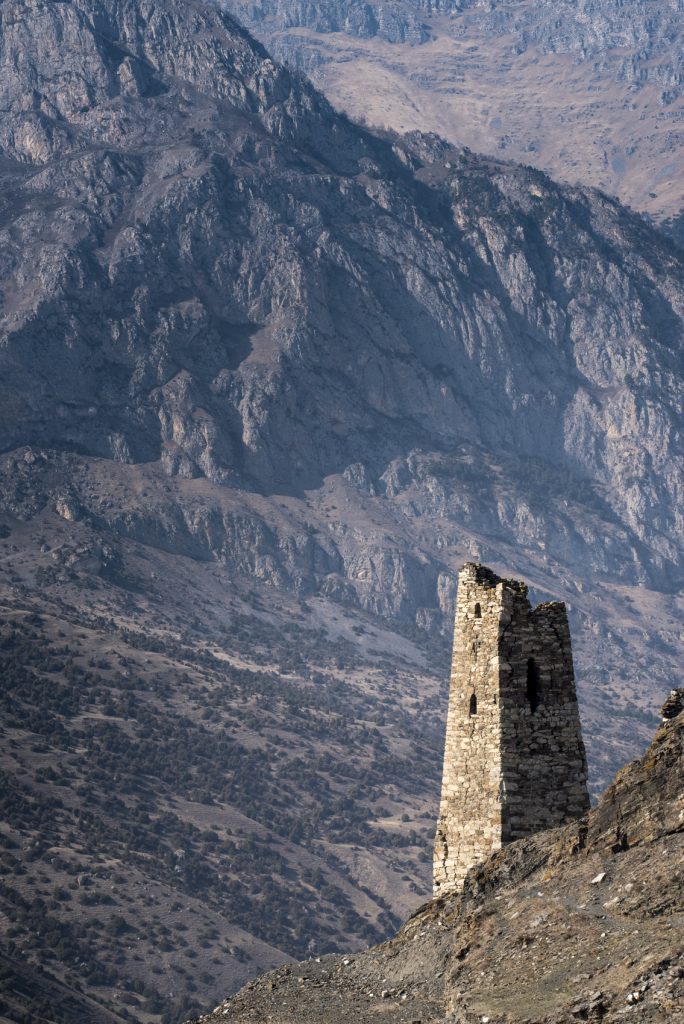 You can continue the journey here