Monlam Chenmo is the greatest prayer festival in Tibet.  Originally established in 1409, it starts on the 4th day of the Tibetan calendar and ends on the 15th – usually during February.  During the festival monks, nuns and pilgrims commemorate buddha, following various traditional practices.  Monlam means “wish-path” – the Buddhist path of helping others through their prayers.

Although banned in Lhasa, the festival attracts thousands of pilgrims in the Amdo region of eastern Tibet.

One of the highlights of the festival involves ‘the sunning of the buddha’.  Monks  and pilgrims carry out a giant thangka from their monastery across their town or village and up a hill opposite.  Here they unravel it, revealing a great image of a buddha to the skies above and pilgrims below.

I visited the monasteries around Rebgong, Labrang and Taktsang Lhamo in February 2105.

Pilgrims carrying out the great thangka of Sanggeshung Yago Monastery. 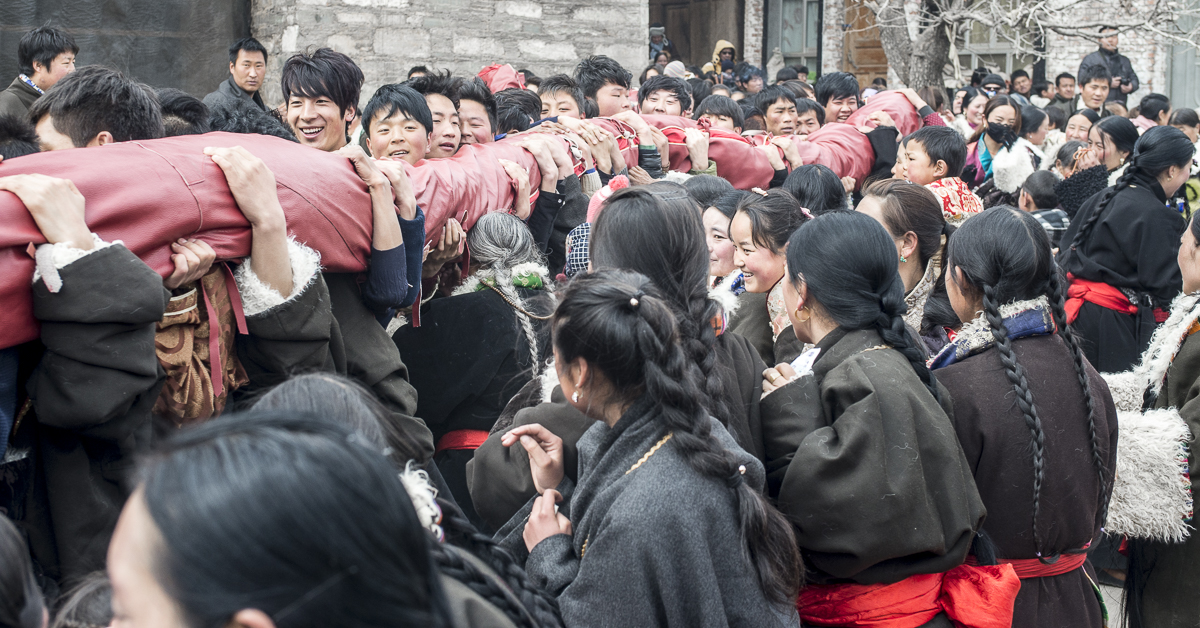 The carefully woven and delicate thangka has a cotton backing and silk covering to protect it.  The images are of the sakyamuni buddha and various bodhisattvas. 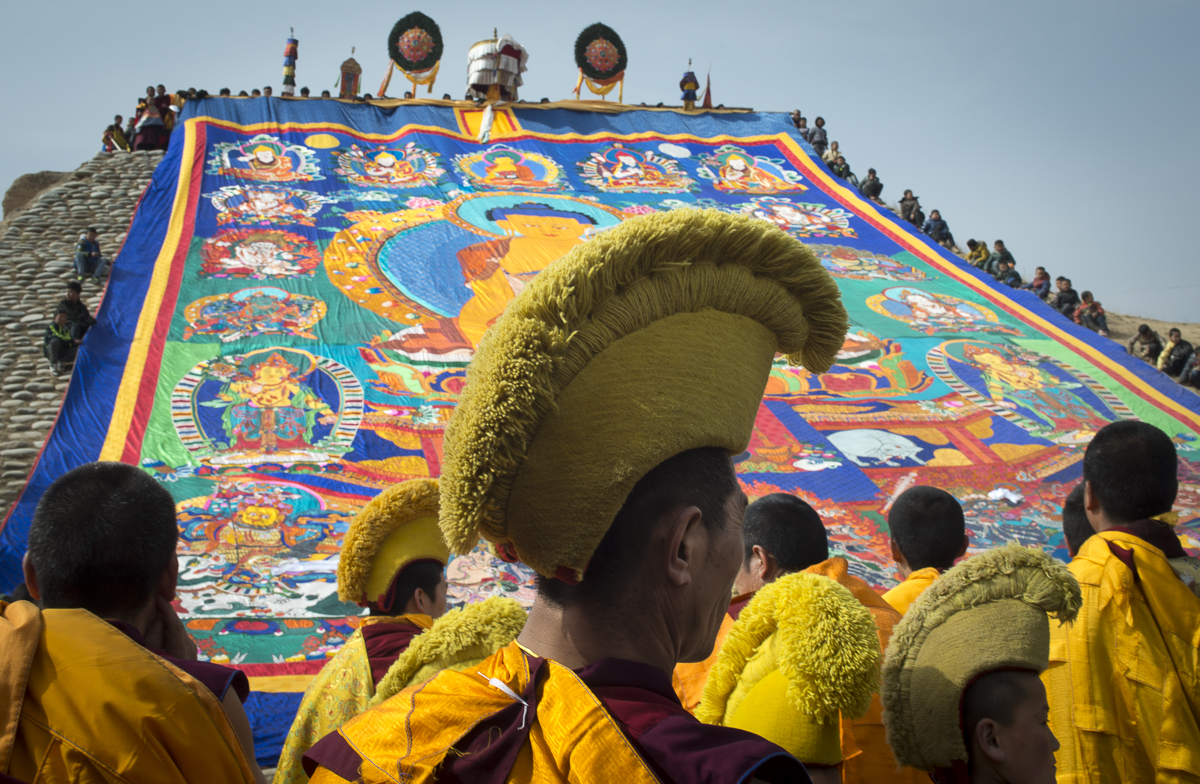 Labrang is one of the largest monasteries in Amdo, home to the greatest number of monks outside the Tibetan Autonomous Region and is of the Gelug school of Buddhism. 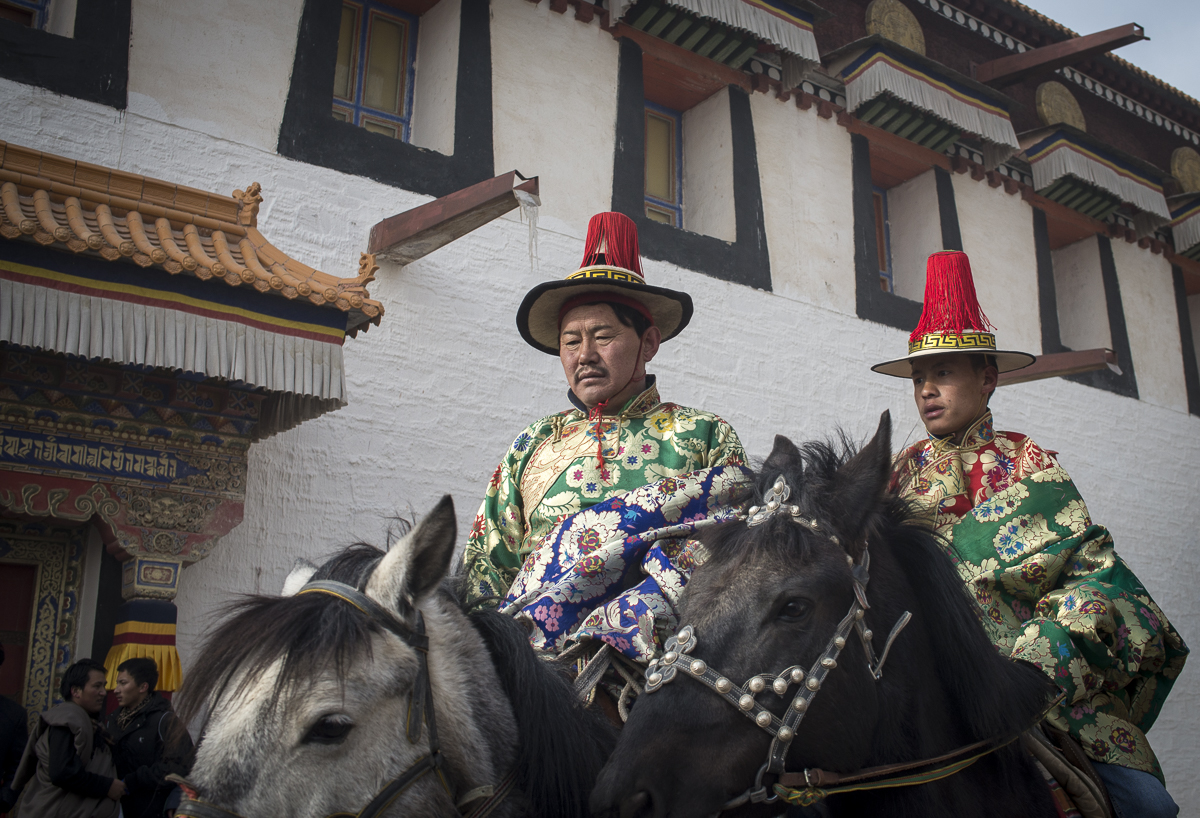 Horsemen are used to clear the crowds as the monks bring out the great thangka from the monastery. 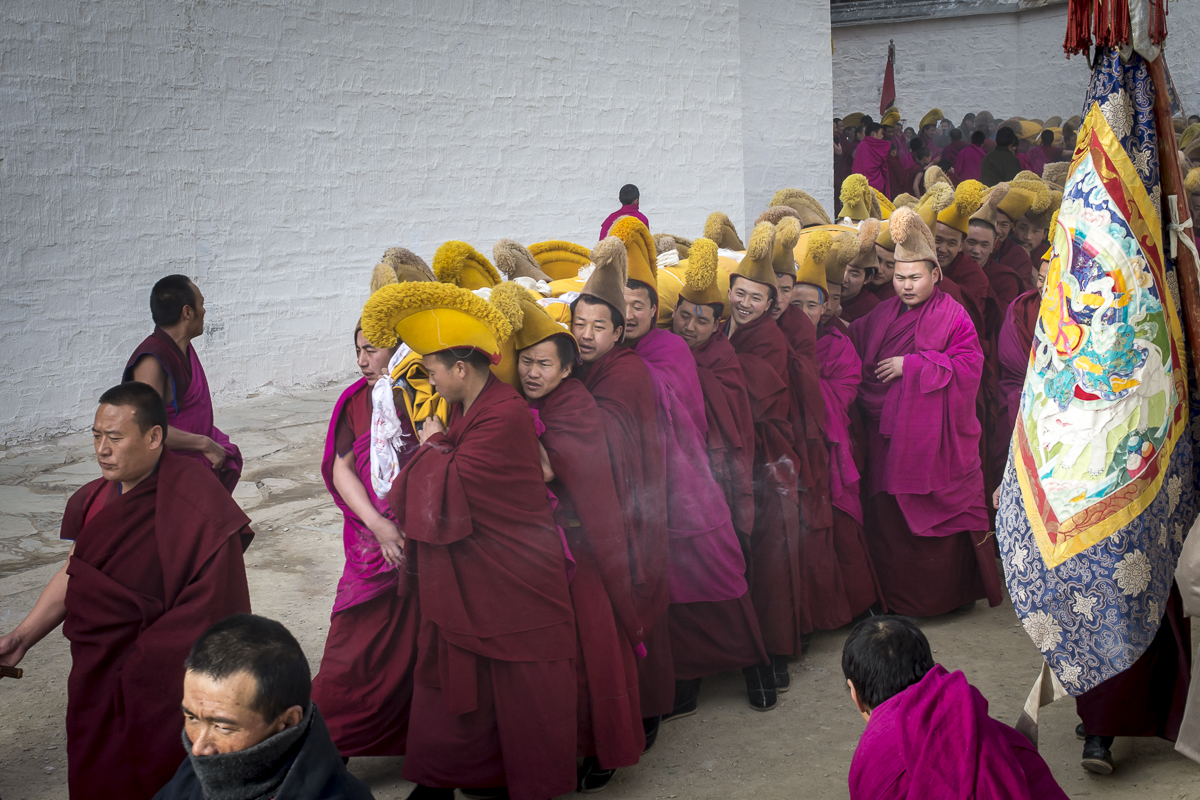 Having photographed the tangka coming out of the monastery I knew I had to race across the complex and over the river to arrive at the hill opposite before the monks in order to capture the photograph I had in mind.  However, thousands of pilgrims were also struggling to get across the river and the bridge was blocked.  I squeezed through legs, avoided the Chinese authorities and made it half way up the hill before slipping and rolling back down again to the amusement of several children.  I clambered up a second time to find myself alone at the top as the monks arrived. 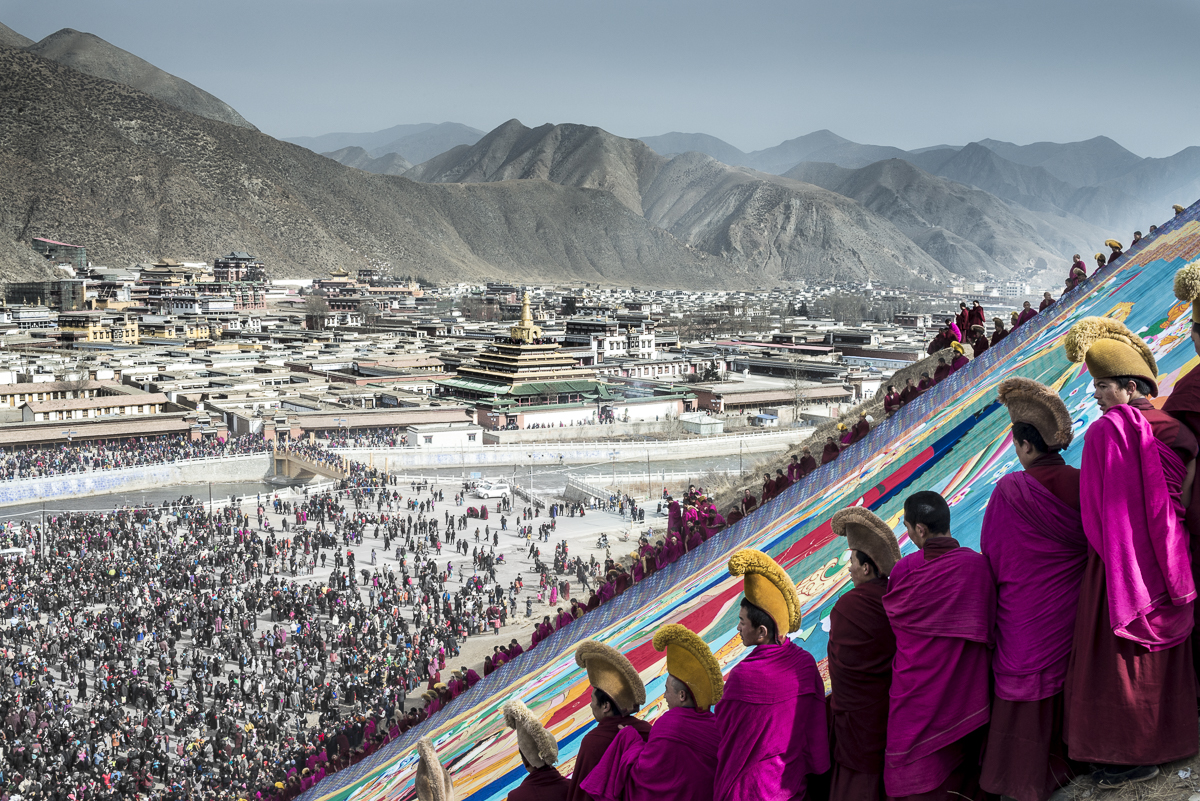 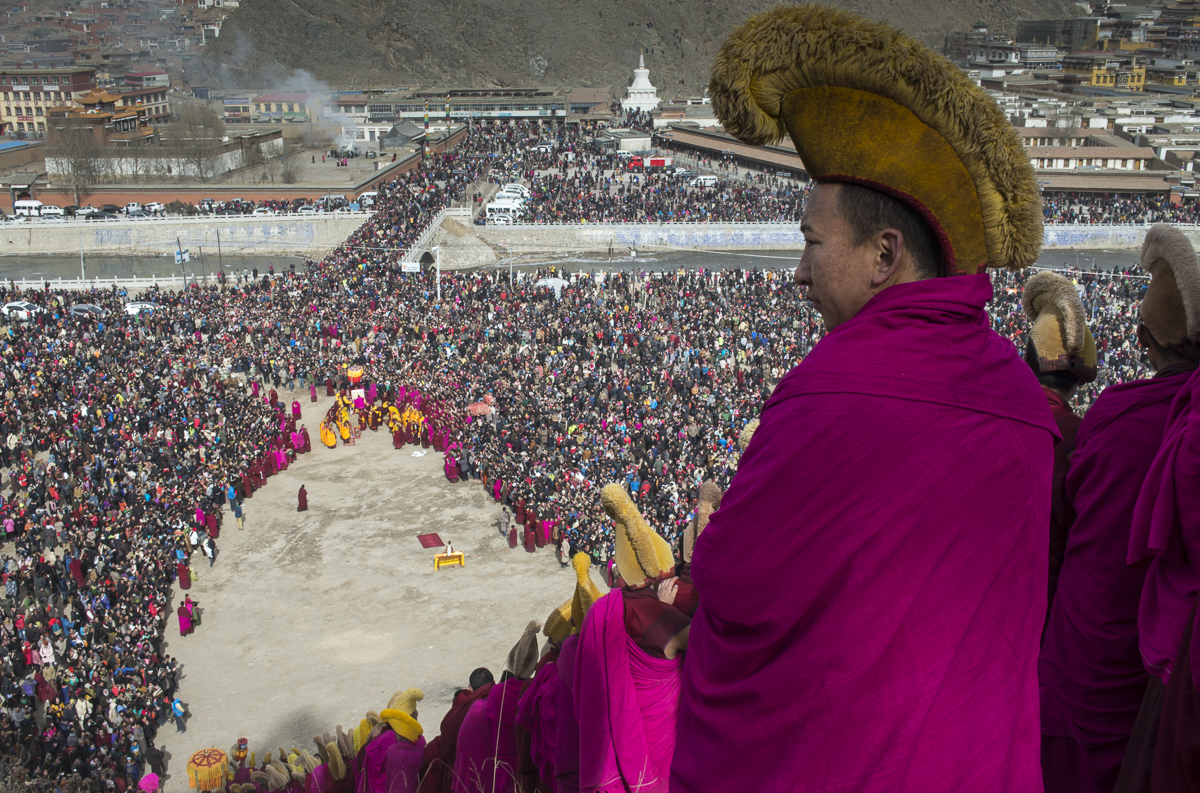 After the ceremony the monks carefully roll up the thangka, carry it around the hill three times and return it to the monastery until the following year. 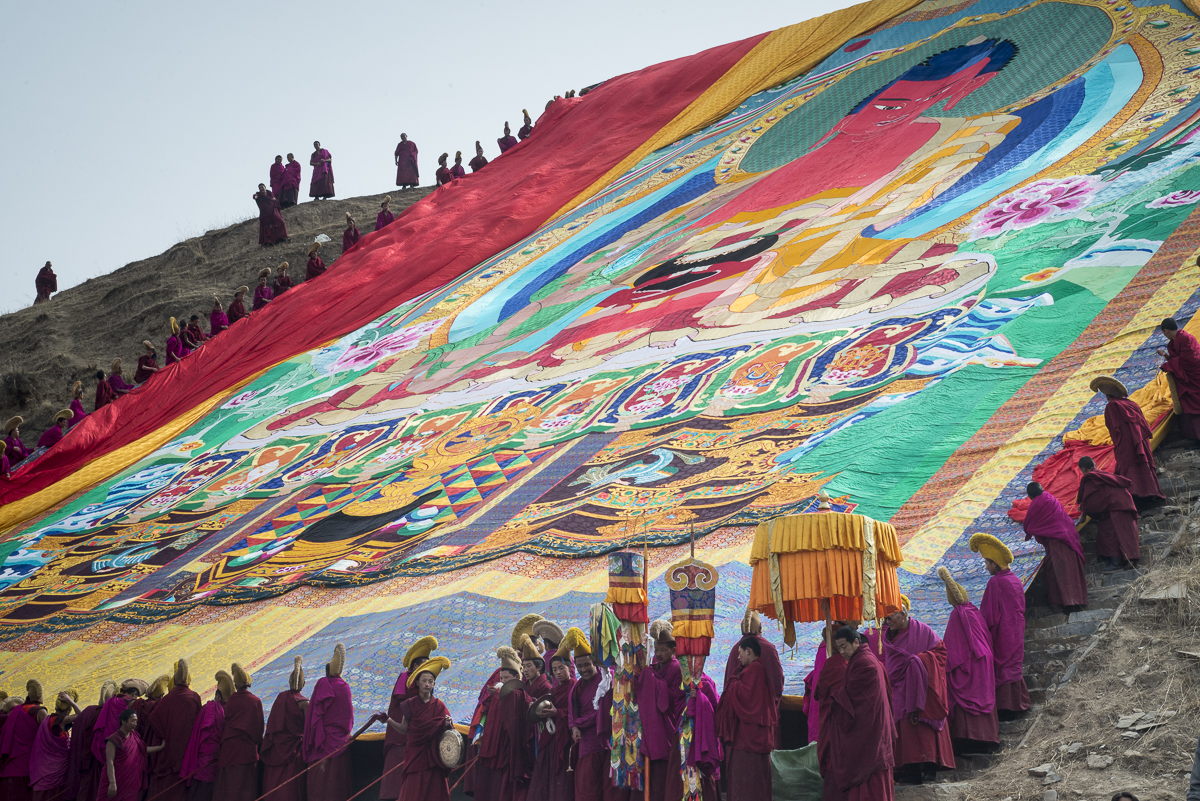