A couple of kilometres outside the town of Gondar sits Fasilidas’ Bath, a complex built around a sunken pool which may have served as the Emperor’s second home. This, as it has for centuries, acts as the focal point for Gondar’s celebration of Timket, the Ethiopian Church’s Epiphany. 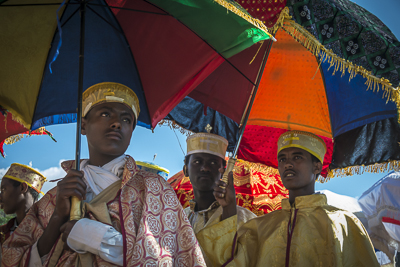 Timket is played out as a symbolic re-enactment of the baptism of Jesus in the river Jordan. Every Orthodox Church in Ethiopia houses a Tabot, a replica of the Ark of the Covenant, as part of its altar. These are rarely seen by the laity except during Timket when, wrapped in cloth, they are carried on a priest’s head to a body of water which is then blessed and sprinkled on the participants. 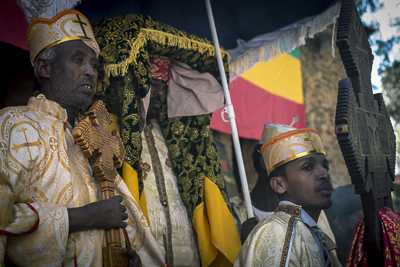 In Gondar, seven churches send out processions of priests who, wearing decorative robes and carrying colourful ceremonial umbrellas, make their way through a crowd of thousands to Fasilidas’ Bath for an all night vigil.

The atmosphere was dramatically different from that I had encountered at Lalibela. This was a public celebration with the atmosphere of a carnival. The whole of Gondar had dressed up in colourful costumes and were escorted by drummers, dancers and gymnasts as they made their way down to the baths.

The night was interminably long. Not knowing what to expect, I shuffled my way to the front of the crowds around the baths and waited for a dramatic moment to photograph. However, although from time to time the priests would start to chant and the crowd would close in, just as quickly all would fall quiet again.

As dawn arrived the atmosphere began to change quite quickly. The priests’ chanting continued to build and the crowds pressed ever closer, threatening to send me, and many of the priests, into the pool’s water. 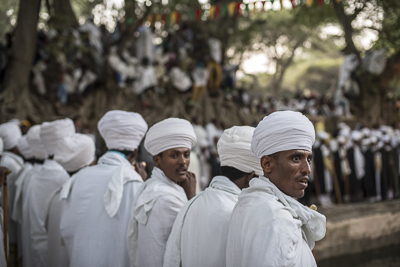 The young men next to me started to undress; others climbed trees and clambered along frail branches hanging over the pool. The bishop suddenly stepped forward and dipped a long staff topped by a gold cross into the water. Then cupping the water in his hands he sprinkled it on those next to him, blessing them. The priests followed suit, scattering water over those around them. There was a charge in the air as if the last twenty-four hours had all been building to this moment.

Suddenly, as if an invisible sign had been made, the man right next to me leaped into the pool. Mayhem followed as hundreds of others quickly followed with ecstatic cries from all directions, from over the walls and out of the trees. It was as if a huge riotous water fight was playing out. Little had changed since James Bruce’s description of the event almost two hundred and fifty years earlier. 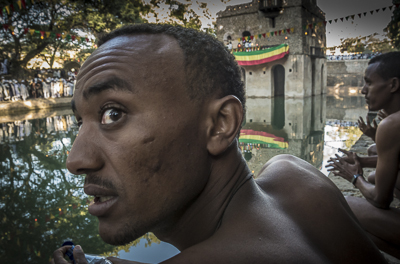 Exhausted from the crush of the crowds and the lack of sleep, yet exhilarated from the spectacle and its energy, I watched from a balcony as the Tabots were carried back to their homes, and marveled at what a wonderful country Ethiopia is. 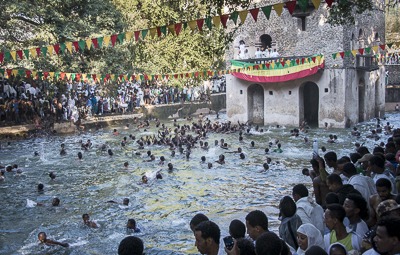